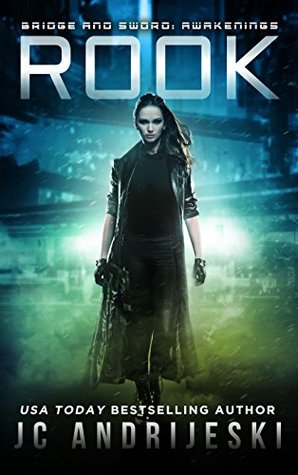 “You are the Bridge…”

Allie Taylor lives in a world populated by seers, a second race discovered on Earth at the beginning of the 20th Century. Psychic, hyper-sexual and enslaved by governments, corporations and wealthy humans, seers are an exotic fascination to Allie, but one she knows she’ll likely never encounter, given how rich you have to be to get near one.

Then a strange man shows up at her work –– then another –– and pretty soon Allie finds herself on the run from the law, labeled a terrorist and in the middle of a race war she didn’t even know existed. Yanked out of her life by the mysterious and uncommunicative Revik, Allie discovers her blood may not be as “human” as she always thought, and the world of seers might not be quite as distant as she always imagined.

When Revik tells her she’s the Bridge, a mystical being meant to usher in the evolution of humanity––or possibly its extinction––Allie must choose between the race that raised her and the one where she might truly belong.

The glass tube slammed him midair.

Knocked sideways, he missed his mark and crashed into the wall short of the alcove he’d been aiming for. He landed in a heap and pulled in his limbs, fought to drag himself back to his feet when the cord pulled, making him lose his balance.

They still had him.

The cord left a hole in his jacket on the right side. He grabbed the braided metal with his bare hands, scanning the glass vial embedded at least a thumb-length into his flesh, right through his jacket. The cord went taut. The teeth closed. Before he could let go, the vial slid out of him in one quick pull, the braided metal ripping skin off his hands as it went.

Revik screamed, clutching his abdomen. Blood poured out between his fingers, soaking his pants and jacket. He mashed his hand over the hole. Fighting shock, he picked himself up, stumbled backwards.

That time, he practically dove into the Barrier.

Ripping the Glock out of its holster, he fired, blindly, running in the opposite direction. The first shot cut a dark hole in the wall, but did what he intended, forcing them behind cover. He switched to his mind, knowing it would be overheard, no longer caring.

He sent up a high, sharp blast of alarm.

His warning cry slammed against something before it reached the main construct walls. He watched it dissipate, useless. Looking around in the physical, his eyes lit on a pull mechanism for a fire alarm. He caught it in the hand holding the gun and yanked it down.

Immediately, a shrieking bell went off.

Dehgoies? Eliah’s thoughts rose, as if coming through smoky glass. Where are you? Can you hear me?

Eli… have you got her? Revik blinked back pain, clutching his side. His mind shifted sideways. It threw off his balance, forced him into the forward part of his consciousness.

Gods, the drug. He’d forgotten about the dart.

Eliah… someone’s trying to leave with her. The truth hit him again, bringing a near panic. Look for boats, anything big enough to land a helicopter. They’ll want her off the ship as soon as possible––

Brother, calm yourself! Where are you?

Find her, goddamn it! Start with the atrium. Last I saw, they had her there.

Where are you? I’ll send someone.

No. I’ll come to you. He stared at the blood soaking his jacket, realizing the truth. Eli. Please… I can’t get to her. You have to do this. Please. Please…

He kicked the other seer out of his mind.

The hunters were regrouping.

Limping backwards in a half-jog, he held up the Glock, mashing his other hand into his side. He scanned behind him, looking for open doors. He had to stop the bleeding, or he’d be even more useless. If it meant draining humans from the Barrier like a fucking ridvak, he would get the light he needed to do it.

He thought about Allie again and it got him moving, propelling his legs faster.

He’d asked her for a divorce.

He’d asked her for a divorce, then let her see him with someone else.

If he had to kill everything between here and the outside decks, he wouldn’t let that be the last thing he’d said to her.

JC Andrijeski is a USA TODAY bestselling author who writes paranormal mysteries and apocalyptic fiction, often with a sexy, romantic and metaphysical bent. JC has a background in journalism, history and politics, and loves martial arts, yoga, meditation, hiking, swimming, horseback riding, painting… and of course reading and writing. She grew up in the Bay Area of California, but travels extensively and has lived abroad in Europe, Australia and Asia, and from coast to coast in the continental United States. She currently lives and writes full-time in Bangkok, Thailand.

To learn more about JC and her writing, please visit jcandrijeski.com.

If you want an email when JC’s next book is released, as well as special giveaways, offers to read books early and other prizes, join her newsletter, THE REBEL ARMY, at: http://hyperurl.co/JCA-Newsletter

JOIN NOW and you’ll get a FREE BOOK!