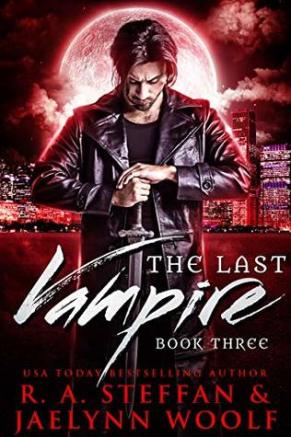 After giving myself up to the Fae, I expected to become the latest casualty of a war that should have ended centuries ago. Instead, I ended up inextricably bound to the last vampire on earth.

My life since the Fae marked me has become unrecognizable. Inside, I’m still the 26-year-old waitress who struggled with working two jobs while being serially dumped by a parade of disgruntled boyfriends. Now, I’ve somehow become a figurehead, coveted and despised in equal measure by two warring supernatural races.

Can I trust the fragile bond connecting my heart to the unbeating heart of a vampire? Every instinct I possess tells me to pull back… protect myself… protect him. But every time I try to run away, I end up back in his arms.

Alliances are shifting. Old resentments are flaring. Both my father and I are now chess pieces in someone else’s grand strategy.

No more. I’m done with being a pawn.
It’s time to up my game.

The Last Vampire is a steamy new urban fantasy romance series from USA Today Bestseller R. A. Steffan and Jaelynn Woolf, co-authors of the Circle of Blood saga.

Download Book Three today, and enter a world shared by humans, fae, demons, and one very reluctant vampire. It’s a place where the supernatural threatens the mundane, nothing is as it seems, and love will either be the world’s downfall—or its salvation.

I received an Audible Code via Audiobook Boom for an honest review. What follows is my opinion and mine alone. There was no compensation for this review.

This is the third book in an ongoing paranormal romance series about a young woman named Zora navigating her now crazy life. Everyone seems to be out to get her and she only wants one thing, the safety of her estranged father.

I have listened to the previous books and writing wise, I liked the first one but wasn’t impressed with the second. This one, however, is more up to par with the first or slightly better. We get to see the way the demons live and get a larger idea of the world. Events of book one are referenced in a twist I should have seen coming, but didn’t.

The narration is still good and I was pulled into the world. As I stated before, the story itself is better in this one than in the second. It doesn’t feel like a long-winded wait fest and I was actually invested in Zora’s journey again.  I definitely want to know what happens in the future and cannot imagine how Zora and Rains are going to get out of the situation they are currently in.