Praise for WHAT MAKES US


What Makes Us is a heart-stopping, heartbreaking read — a book full of heart. Mittlefehldt’s thoughtful, nuanced exploration of identity pulled me in from the very first page, and I could barely put it down. Eran’s story takes a universal coming-of-age theme — finding out your parents aren’t who you thought they were — to a tightly wound and thrilling extreme. Most important, this book provides satisfying, much-needed representation of a contemporary, complex Jewish teen and his family. ―Lisa Rosinsky, author of Inevitable and Only 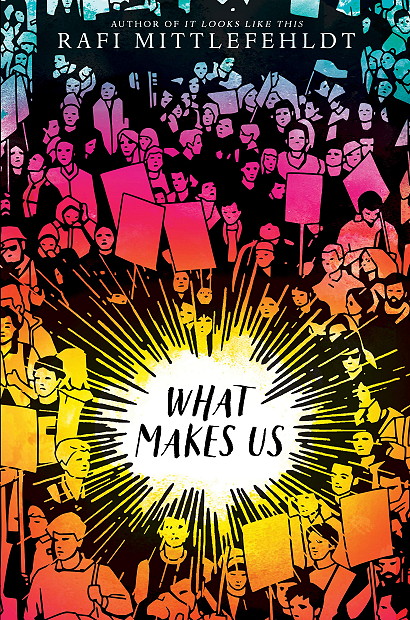 A viral video reveals a teen’s dark family history, leaving him to reckon with his heritage, legacy, and identity in this fiery, conversation-starting novel.

Eran Sharon knows nothing of his father except that he left when Eran was a baby. Now a senior in high school and living with his protective but tight-lipped mother, Eran is a passionate young man deeply interested in social justice and equality. When he learns that the Houston police have launched a program to increase traffic stops, Eran organizes a peaceful protest.

But a heated moment at the protest goes viral, and a reporter connects the Sharon family to a tragedy fifteen years earlier — and asks if Eran is anything like his father, a supposed terrorist. Soon enough, Eran is wondering the same thing, especially when the people he’s gone to school and temple with for years start to look at him differently.

Timely, powerful, and full of nuance, Rafi Mittlefehldt’s sophomore novel confronts the prejudices, fears, and strengths of family and community, striking right to the heart of what makes us who we are.

You can purchaseWhat Makes Us at the following Retailers:

MY REVIEW
I received a copy of WHAT MAKES US by Rafi Mittlefehldt by the publisher for an honest review. What follows is my opinion and mine alone. There was no compensation for this review.
What can I say about this book? This is one of those reads that I was pulled in and devoured. I was enthralled with the story. I was angry with the story. I loved the story. So many emotions and just not enough words to properly place my review.
Eran is a teenager with teenager emotions (extreme. Go ahead and fight me on this one, but come on, teens are a bit extreme). He is passionate and wants to do what is best for the world and in doing it, he jumps at the chance to speak every chance he gets. Okay… let me just backtrack on this.
To properly grasp this book, you need to look at society as a whole. What are we? What, as the title states, makes us? We are opinionated. We are passionate. We want change. But, do we pause and think before we act?
This book is about a teenager who learns something about himself because he acted without thinking first. It is about a woman who was forced to speak and take on the actions of a man she loved because no one bothered to think before acting on their pain. It is about a young girl who has always thought before acting and is pushed to act once she is pressured by outside forces and her internal ones.
We all act without thinking. And this book, as much as it is a story about a young boy learning about himself, is about how we all need to start thinking. We don’t need to stop acting, but we should still think and care. Our actions may not hurt us, but it could hurt others.
And this may seem philosophical and not to the point of the story, but as I’m sitting here and really think about what I’ve read (a beautiful book, mind you), I’m forced to make a literary comment on it. I’ve read other reviews talk about the individuals, but not the actual emotional impact they have felt upon reading the book. And this, this is my emotional take.
Mittlefehldt is a great writer. He is a great storyteller. I was talking to my best friend last night about how I was pulled away from the story not because the writing didn’t flow, but because they matched so well that I felt I was with the characters. I was angry with them. I wanted to be there, to hold them, to yell for them. I wanted to act. And even at the start of this review (which I am leaving unchanged because I feel it shows exactly what the book was intended for), I was acting before actively thinking about what I wanted to say.
And now that I am thinking, I’m seeing more than just the story given. I’m seeing me. I’m seeing you. I’m seeing Rafi Mittlefehldt. I’m seeing how there are always going to be differing opinions, but not enough quiet to actively just discuss.
Okay, in terms of story, you can guess that this book truly hit me. I wasn’t sure at first because I was worried this was a more politically leaning book. It isn’t and I’m glad about that because I honestly don’t want to ever air out my own personal politics online. But, once I really got into the book (which did not take long, probably around the five percent mark), I was in. I would read passages out loud. I would fan over the way Eran’s mom lived her life (seriously, this woman is goals. I need to be more like her).
The writing is . . . I don’t want to say normal . . . it’s how you would think life would have been written. Like, would you want your life described in flowy language or would you like the truth right there in your face? I personally like the truth. And though the story is told in a first person point of view (for Eran), I didn’t completely feel it was unreliable. I felt that for him, this was his truth, just as for the other points of view was theirs.
Honestly, I feel everyone should read this book. And, Mr. Mittlefehldt, thank you for writing it.
As I said before, this book isn’t just about a teen going through a discovery that nearly destroys his world. This book is about how we should all learn to pause, breathe, ride out the currents, or even just think before we act.
Final Rating: 5/5 (seriously, everyone needs to read this).
P.S. Mr. Mittlefehldt, you have a new fan. Hi, I’m that new fan.

WHAT MAKES US BY RAFI MITTLEFEHLDT EXCERPT
II

My mom’s hair is all curls. They wiggle when she shakes her head, even a bit. It’s a big bushy mass, jet black, a bird’s nest. I’d have to get close to see the roots, the tiniest bit of brown, probably not even a quarter inch. Eema will dye it again tonight. She won’t let more than a couple weeks go by.

“Why do you do that?” I asked her once. I’d watched her as she unwrapped her towel turban, quick but careful, practiced but vigilant, a ritual I’d seen millions of times but never thought about.

When I finally did, it occurred to me how weird it was. Eema’s not one to care about appearances more than is absolutely necessary. She’s not sloppy, not untidy; she just has no interest in cosmetics. If it’s not practical, it’s not worth doing. I’ve never seen her wear lipstick.

She paused in the middle toweling off her hair, as if she had never considered the question. “I prefer black,” she said. That was that.

I watch her now as she reads the Chronicle, curls shaking to tiny eruptions. The actual print version, no quaint. I look for the steam above her coffee and don’t see it. She almost never finishes her coffee, lets it cool half-full, but still complains about how expensive chicory is.

Rafi Mittlefehldt is a writer who has worked as a newspaper reporter, freelance theater critic, and children’s author. His debut novel was It Looks Like This. Rafi Mittlefehldt lives with his husband in New York City.

A NOTE FROM THE AUTHOR
Shortly after the horrific Boston Marathon bombings in 2013, I read an article that mentioned one of the bombers having left behind a wife and three-year-old daughter. It was a throwaway line, but it stuck with me — I couldn’t stop thinking about that girl, who was too young to understand what had happened. When would she find out who her father was, and how would she process that? How would others react to learning about her family history? Would she keep it a secret? Would her mother?

What Makes Us began very simply as a story exploring those questions. But as I fleshed out the two main characters, Eran and Jade, their personalities took the story deeper, toward matters that are personal to me but relatable to so many. Eran’s volatility and tendency to react instinctively force him to confront issues of impulse control and anger management. And both characters’ uncertainty regarding their own pasts compels them to wrestle with self-determination and to ask, What makes a person? As the novel switches between Eran’s and Jade’s perspectives, we see them reluctantly frame and then try to answer this question, all against the backdrop of a community on the brink of chaos.