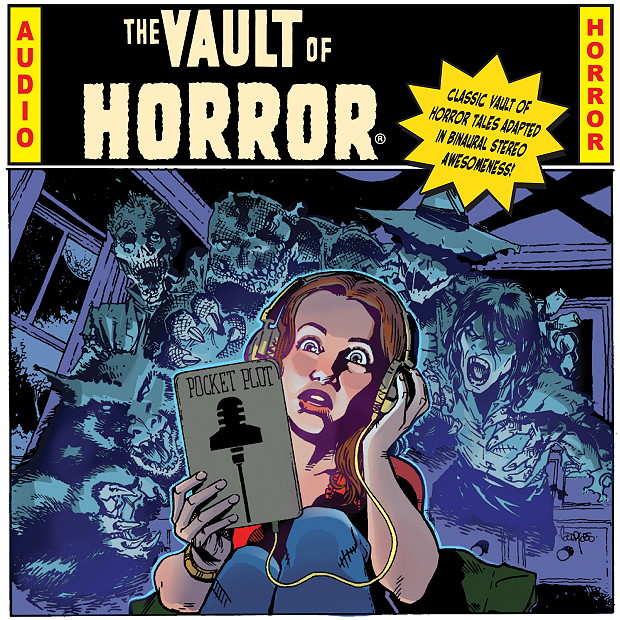 When the history of horror comics was written, one name stood and still stands above the rest: EC Comics. With equal parts suspense, gore, camp, and morality tale, the triumvirate of EC’s horror output laid the groundwork for what was to come from many of the genre’s greatest writers and directors.

Now, AudioComics (a division of Pocket Universe Productions) presents EC COMICS PRESENTS… THE VAULT OF HORROR, its stories adapted and presented in an audio-rich fully immersive setting complete with a full cast, scoring, and soundscapes. This ghastly grimoire adapts issues #12 to #17 of the classic horror series, with werewolves, vampires, cutthroats, and numerous ne’er-do-wells!

Starring Kevin Grevioux (creator of the Underworld film franchise) as the Vault Keeper, and special guests Phil Proctor of the Firesign Theatre and Denise Poirier (MTV’s Æon Flux), the first season of VAULT is going to chill your spine and clam your palms! So put your headphones on and enter THE VAULT OF HORROR! It’s a real scream!

FEATURING KEVIN GREVIOUX AS YOUR HORRIFYING HOST, THE VAULT KEEPER!

You can purchase The Vault of Horror at the following Retailer:

Lance Roger Axt (Co-Founder) was the creator/Producing Director of the audio theatre production company Play it by Ear Productions, through which he produced world-premiere radio one-acts for the award-winning anthology series “We Have Ignition,” and produced and co-directed a festival of original five-minute radio plays, You Have Five Minutes… before a live audience in Albuquerque, NM in 2009.

In addition, he produced a live re-creation of Norman Corwin’s legendary audio essay We Hold These Truths at the Canterbury Woods Auditorium in Pacific Grove, CA (2005), followed by a series of old-time radio re-creations on the Central Coast, “Those Thrilling Days of Yesteryear” (2007 – 2010)

Lance is the former Vice President of the National Audio Theatre Festivals, Inc., an organization dedicated to the education and promotion of contemporary audio theatre, and was a six-time attendee at the Festivals’ Audio Theatre Workshop in Missouri, where he directed the world premiere of Knocking on Heaven’s Door, written by comics legend JM DeMatteis (2011). He also produced the NATF’s “Audio Art of Animation” workshop in Hollywood, and is one of the co-creators of the Norman Corwin Award for Excellence in Audio Theatre, the only award of its kind in America honoring life achievement in audio theatre/radio drama. He has also narrated over two-dozen audiobooks for Audible Studios and Audible ACX.

A classically-trained actor (MFA, Trinity Rep Conservatory in Rhode Island) who has performed off-Broadway and with regional theatres in New England, Lance is also a produced playwright (Chasing Dragons), and has been commissioned to write a screenplay for a new production company in Los Angeles. Short fiction published by 01 Publishing and Pro Se Press (forthcoming). He is currently working on both full-length play and screenplay #2; on a graphic novel set in 1930’s Hollywood; and on his first YA prose trilogy.

Director: The Domino Lady: All’s Fair in War (2012); Battle for LA (2013);
Co-Producer on all AudioComics Company productions (except HorrorScopes). Adapted Battle for LA for audio, and co-adapted Molly Danger, Episode One: Mighty.

FACEBOOK | INSTAGRAM | TWITTER | WEBSITE | IMDB
William Dufris (Co-Founder) began his audio career in London (radio plays, audio books, film/animation dubbing, language tapes), where he resided for 13 years. During this time, he had the privilege of sharing the microphone in a number of BBC Radio plays with Kathleen Turner, Sharon Gless, Stockard Channing, and Helena Bonham-Carter. He worked with legendary director Dirk Maggs (of Hitchhiker’s Guide to the Galaxy fame) on his audio drama productions of The Amazing Spider-Man (where he voiced the title role of Peter Parker), Judge Dredd, Voyage, and An American Werewolf in London. He is best known as the original voice of Bob the Builder in the popular children’s show Bob The Builder for the US and Canada (series 1-9).
These experiences led Dufris to co-found the audio production company The Story Circle, Ltd in the UK, which produced audio theatre programs for numerous publishers. Upon returning to the US, Dufris founded Mind’s Eye Productions, and co-founded AudioComics, for which he has been producer, director, actor and engineer. He was also a guest artist at the National Audio Theatre Festival’s 2005, 2006, and 2007 Workshops, appearing in the world premiere works The Best Place to Grow Pumpkins, Rewind, Extra-Ordinary, and Histories, and directed Arigon Starr’s audio comedy Super Indian for Native Voices at the Autry Center in Los Angeles.With over a thousand audiobooks to his credit, Bill is a multiple finalist for the APA’s prestigious Audie Award (winning in 2012 for The Murder of the Century), has garnered numerous Golden Earphones Awards through AudioFile Magazine, and was named by AudioFile as “One Of The Best Voices At The End Of The Century.”AUDIOCOMICS COMPANY CREDITS:
Director: Starstruck (2010); HorrorScopes (2011); Honey West: Murder on Mars; Titanium Rain, Episode One (2012); Gamadin: Word of Honor; Molly Danger, Episode One: Mighty; The Perhapanauts: Monsters Among Us, or Chimaera Wanna Tellya Somethin’ (2013); The Starling Project (2014); Locke & Key (2015)

Co-Producer on all AudioComics productions.

Pocket Universe is also one of very few production companies that brings a unique collaborative approach to the medium by working in partnership with independent creators and writers, guiding them through the process of adapting their stories for audio, all the while ensuring no unwelcome viewpoint is foisted onto their creations. Pocket Universe offers a second life for any creator’s story, via a medium that promises to present that creation to an entirely new audience.

Pocket Universe plans to expand our reach into the worlds of video games and animation, bringing the same quality found in our full-cast productions to the audio components of these forms of entertainment. Pocket Universe is also developing an original line of creator-owned properties for trans-media options and sales to the entertainment industry, including Mr. Dufris’ Twice Upon a Time, and Mr. Axt’s Plunder and Sight Unseen.