Praise for CATFISHING ON CATNET

“Kritzer’s take on a benevolent AI is both whimsical and poignant. An entertaining, heart-filled exploration of today’s online existence and privacy concerns.” ―Publishers Weekly, starred review

“Smart, sly, scary, and irrepressibly good fun, this novel has everything I’ve ever wanted from a story: it is a cerebral, funny, tender, big-idea delight. I can’t wait for you to read it.”―Kelly Barnhill, Newbery Award-winning author of The Girl Who Drank the Moon

“Kritzer’s flawless collection taps deep wells of emotion and wonder…. Her work is indisputably speculative, but it’s a perfect entry point to the genre for readers who prefer fantastical and futuristic elements to stay more in the background, with human (and robotic) feelings always at the fore. This splendid treat is not to be missed.” ―Publishers Weekly, starred review, on Cat Pictures Please and Other Stories 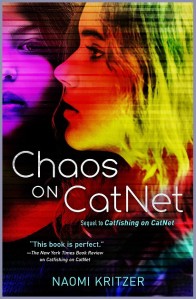 It takes an AI to catch an AI in Chaos on CatNet, the follow-up to Naomi Kritzer’s award-winning near future YA thriller.

When a mysterious entity starts hacking into social networks and chat rooms to instigate paranoia and violence in the real world, it’s up to Steph and her new friend, Nell, to find a way to stop it—with the help of their benevolent AI friend, CheshireCat.

You can purchaseChaos on CatNet at the following Retailers:

The guidance counselor walks me around the school. This is the first school I’ve ever attended that’s not mostly white kids: when Mom was moving me constantly, we hopped from small town to small town, and she picked small towns where we wouldn’t stand out. Knutson is a lot more diverse.

Tutorial turns out to be a place as well as a time of day—a library and computer lab with a bunch of students working at tables. One of the adults gives the guidance counselor an urgent little wave as we step in. “Nell’s finished her math placement test, and I think she could use a break,” the teacher says in an undertone.  She gestures at a girl with her head down on her arms.

The guidance counselor approaches the other girl a bit hesitantly. “Nell, would you like to come to lunch with us?” she asks. “This is Steph, who’s also starting today.”

Nell raises her head; for a moment, her face looks almost blank

except for this vibrating twitch I can see at the edge of one of her slightly-too-wide eyes. Then she draws in a breath and pastes on the fakest cheery smile I think I’ve ever seen. “How nice to meet you, Steph,” she says. “Yes, I’ll come to lunch.”

Nell is skinny, white, and pale, with the longest hair I’ve ever seen—light brown, in two thick braids that come most of the was down her back. She has a few freckles scattered across her nose, and she’s short. I wonder if she’s younger than I am, but she flicks a look at me from the corner of her eye that’s so wary I’m hesitant to ask her any questions.

The guidance counselor hands each of us a tray with lunch and a carton of milk and then gets pulled away by someone who apparently needs to reconstruct her entire schedule . . . and there we are, in the cafeteria, the two new kids, like someone planned it this way. I sit down, and Nell sits down across from me.

“I don’t know,” Nell says. “My mom homeschooled me. We didn’t do grades, exactly. I’m sixteen.” She lifts a forkful of food, then sighs and puts it down, opening her milk carton and taking a sip of that instead. “How about you?”

“And how did you wind up at Prodigals Academy or whatever this school is called?”

Coya Knutson, and Nell is kind of echoing my own thoughts when I found out my mother didn’t want to send me to any of the big, regular high schools. “It’s not for losers,” she assured me, “it’s artsy.” I’m not convinced those two things are mutually exclusive, but whatever. “My mother and I moved around a lot,” I say. “So, I don’t have enough science credits, and I have Ameri can literature on my transcript three times and other weird stuff like that.”

“I hate Minneapolis,” Nell says with what sounds like some actual sympathy for my plight. “I’m from Lake Sadie, which is up near Brainerd. Where’d you move from?”

“New Coburg, Wisconsin.” I skip the rest of the list. “Why’d you move here?”

“My mother . . .” She swallows hard as her voice gets unsteady.

“My mother is missing.”

NAOMI KRITZER has been making friends online since her teens, when she had to use a modem to dial up at 2400 baud. She is a writer and blogger who has published a number of short stories and novels for adults, including the Eliana’s Song duology and the Dead Rivers Trilogy. Her 2015 short story “Cat Pictures Please” won the Hugo Award and Locus Award and was a finalist for the Nebula. Naomi lives in St. Paul, Minnesota, with her family and four cats. The number of cats is subject to change without notice.