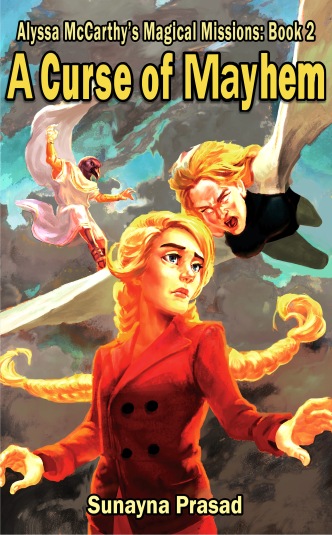 History, like magic, has a habit of repeating itselfIt’s been six months since thirteen-year-old Alyssa McCarthy left magic behind for good. Or so she thought…

Then the enchanted objects that protected her disappear. Now a skeleton named Errol has cursed her with magical powers that keep getting her in trouble. Suddenly strange things are happening with disastrous effects, and if Alyssa can’t remove the magic, she will lose everything she holds dear.

In order to get rid of her unwanted wizardry, Alyssa will have to boost her bravery and confidence and determine who Errol really is. But every time Alyssa uses an enchantment, Errol is one step closer to getting his flesh back and becoming alive, and he will do anything to achieve his goals…even if it means destroying Alyssa’s happiness.

Originally published in 2016 as “Wizardry Goes Wild” and “The Unruly Curse” in 2019, “A Curse of Mayhem” is book two in the exciting and suspenseful “Magical Missions” series.

I received a copy for an honest review. What follows is my opinion and mine alone. There was no compensation for this review.

A Curse of Mayhem is the second book in the Alyssa McCarthy Magical Missions series from Sunayan Prasad. The story is set after the events of book one. Alyssa is now living with her Godfather and legal guardian, Alex, in a new city. She has new friends and is living a magic-free life.

Until something happens and magic comes out of her hands.

The beginning of the book was a bit difficult to get into. I found the lack of dialogue tags and action confusing. That said, if the reader pushes past that, the story isn’t bad. Prasad has grown her fictional world bit by bit.

This is another book I will be giving to my boy to read.

3 thoughts on “Blog Tour (Review): A Curse of Mayhem by Sunayan Prasad”