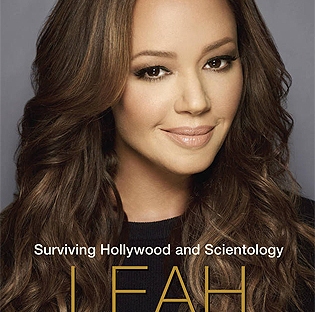 The outspoken actress, talk show host, and reality television star offers up a no-holds-barred memoir, including an eye-opening insider account of her tumultuous and heart-wrenching thirty-year-plus association with the Church of Scientology.

Leah Remini has never been the type to hold her tongue. That willingness to speak her mind, stand her ground, and rattle the occasional cage has enabled this tough-talking girl from Brooklyn to forge an enduring and successful career in Hollywood. But being a troublemaker has come at a cost.

That was never more evident than in 2013, when Remini loudly and publicly broke with the Church of Scientology. Now, in this frank, funny, poignant memoir, the former King of Queens star opens up about that experience for the first time, revealing the in-depth details of her painful split with the church and its controversial practices.

Indoctrinated into the church as a child while living with her mother and sister in New York, Remini eventually moved to Los Angeles, where her dreams of becoming an actress and advancing Scientology’s causes grew increasingly intertwined. As an adult, she found the success she’d worked so hard for, and with it a prominent place in the hierarchy of celebrity Scientologists alongside people such as Tom Cruise, Scientology’s most high-profile adherent. Remini spent time directly with Cruise and was included among the guests at his 2006 wedding to Katie Holmes.

But when she began to raise questions about some of the church’s actions, she found herself a target. In the end, she was declared by the church to be a threat to their organization and therefore a “Suppressive Person,” and as a result, all of her fellow parishioners—including members of her own family—were told to disconnect from her. Forever.

Bold, brash, and bravely confessional, Troublemaker chronicles Leah Remini’s remarkable journey toward emotional and spiritual freedom, both for herself and for her family. This is a memoir designed to reveal the hard-won truths of a life lived honestly—from an author unafraid of the consequences.

My journey into understanding Scientology began well before Leah Remini left the organization. I found out about Scientology back in 2007 when I found a business card at work. I took it, looked at the website connected to it, and was hooked on the controversy of the “religion” well before it became a well-known controversy. In tandem with that, I found Leah Remini as an actor. I loved her humor and work, and, to be honest, was a bit disappointed in her affiliation with Scientology though didn’t necessarily stop watching her.

When Remini’s announcement for leaving Scientology and Troublemaker was released, I knew I had to grab the book. I eventually did and waited. After all, The Aftermath with Leah Remini happened. I once again dove into the Scientology rabbit hole and haven’t really left. Finally ready to read the book, I popped open my audiobook and began to listen.

Leah Remini is not only the author but also the narrator. For that, I am thankful. I find it difficult to read nonfiction and solely rely on my nonfiction to be audiobooks. For a biography, it is best, in my opinion, for the author to be the narrator. And Remini’s reading makes her experience more relatable and human.

Scientology is an interesting subject that I cannot really dive deep on. There is so much about its policies, its history, and the inner workings from parishoner to Sea-Org member. It is not something a person only slightly diving into can explain, but Remini describes her experience very well.

There isn’t much I could really say about it except that her humor truly comes out and she feels like a very passionate woman. I feel inspired to learn more about Scientology and see what I could do for people who are impacted heavily by other organizations and traumatic experiences. It makes me want to explore psychology (a field I have been debating on) and become a therapist.

If you know about The Aftermath documentary series, now on Netflix, this book is a great addition to the show. If you haven’t seen the series, this book is a good beginning stepping stone. And, once you’re done binging on The Aftermath, check out Leah Remini and Mike Rinder’s podcast, Fair Game. I’m currently listening to that and have found even more books I want to read about the subject that is Scientology.

In conclusion, I genuinely enjoyed listening to Remini and her humor. Learning her life story only made her more interesting and human. If you love cults, celebrities, or just an interesting take on a life filled with brash humor, this is the book for you.