Praise for COMEUPPANCE SERVED COLD
A Most Anticipated Pick for The Nerd Daily | Autostraddle
“I love a good heist, and this is a beautifully constructed magical heist in turn-of-the-century Seattle.” ―Mary Robinette Kowal
“This fierce magical heist tale is as smooth as gin and jazz.” ―Beth Cato
“Catnip for those who like watching con artists walk the tightrope of trickery and lies.” ―Marie Brennan
“[A] captivating noir fantasy. . .Deeds presents all this intrigue in reverse chronological order, spinning out mysteries that will keep readers guessing till the end. The result is a well-crafted puzzle; readers’ only complaint will be that they want more.” ―Publishers Weekly, starred review
“A fun, fast-moving heist story that will immediately hook readers who love 1920s-era worlds and soft-fantasy world building.” ―Booklist, starred review
“Readers who love heist and caper stories will be thrilled with Dolly and her quest to deliver much-deserved comeuppance to those who believed they are above the law. The gas-lamp setting gives just the right touch of magic and creeping dread to Deeds’s novel.” ―Library Journal
“A deliciously fun novella set in 1929 Seattle is just what is needed for your bookshelves. . . .Beginning at the ending and following the path backwards through a magical heist, this story brings comeuppance to all.” ―Buzzfeed
“Deeds tells her story with nuance and subtly, luring you into a false sense of pleasantry. From the first page to the very last word, I was enthralled with this tale of thievery and lies.” ―Grimdark Magazine 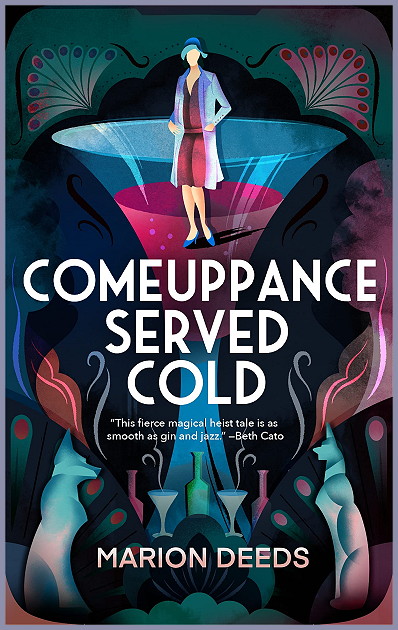 A respected magus and city leader intent on criminalizing Seattle’s most vulnerable magickers hires a young woman as a lady’s companion to curb his rebellious daughter’s outrageous behavior.

The widowed owner of a speakeasy encounters an opportunity to make her husband’s murderer pay while she tries to keep her shapeshifter brother safe.

A notorious thief slips into the city to complete a delicate and dangerous job that will leave chaos in its wake.

One thing is for certain—comeuppance, eventually, waits for everyone.

You can purchase Comeuppance Served Cold at the following Retailers:

I received a free copy of Comeuppance Served Cold for an honest review. What follows is my opinion and mine alone. There was no compensation for this review.

Comeuppance Served Cold is a period fantasy book that pulls you in with a future event. You are given a mystery, an introduction to the magic system, and a short look at the world. It only gets more entertaining from there.

Set in Seattle in the late 1920’s, you definitely get a feel of the setting. The fashion, the corruption, and the spirits. Top it with magic and you have a wild ride. Each character is cleverly crafted and reminiscent to a noir film. They are multifaceted with dreams and vices, each holding your attention in different directions.

The magic style is creative. With modern tools enhancing the magical abilities. For example, a mask being used to aid a person’s shape shifting or potions swirling into mixed alcohol drinks. Liquid courage becomes a fact in this world.

And with the corruption and intrigue, I couldn’t put it down. A fun and fairly short fantasy read for a fan. 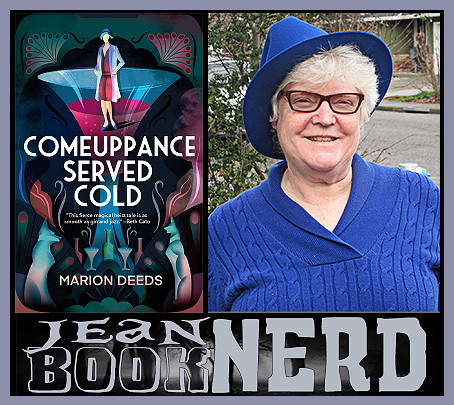 Marion Deeds was born in Santa Barbara, California and moved to northern California when she was five. She loves the redwoods, the ocean, dogs and crows.
She’s fascinated by the unexplained, and curious about power: who has it, who gets it, what is the best way to wield it. These questions inform her stories.
Deeds has published Aluminum Leaves and Copper Road from Falstaff Books, with short works in Podcastle and several anthologies. She reviews fiction and writes a column for the review site Fantasy Literature.