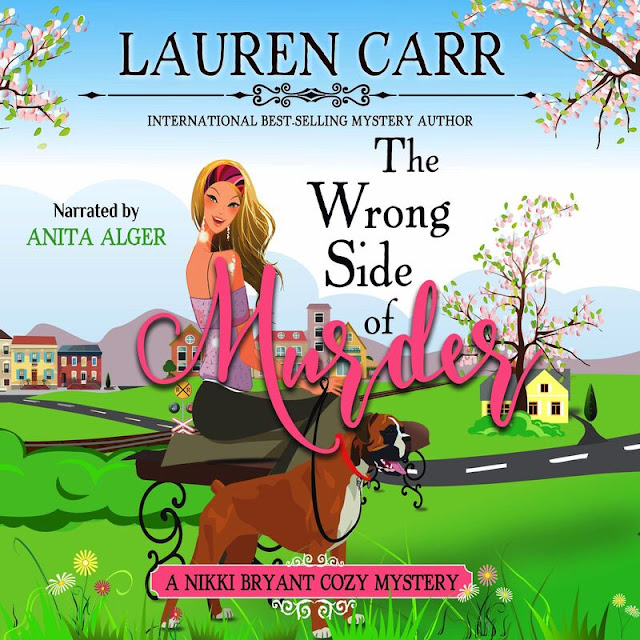 The Wrong Side of Murder is another wonderful cozy mystery by author Lauren Carr. It has all the elements that draw me in – an intelligent female lead, an equally smart boyfriend who partners to help her, a complicated plot where clues are slowly revealed, people who aren’t what they seem to be, comedic moments to balance the darker ones, and several quirky pets full of personality.

It’s a wonderful book to escape into at the end of the day. And get ready to read into the wee hours as, if you’re like me, you won’t be able to stop reading until the mystery is revealed.  -review by Marilyn R. Wilson, Olio by Marilyn

Nikki’s an intense individual who makes the perfect investigative journalist. She wants answers yesterday and she is willing to dig in to get them. She might get it wrong at the beginning but with the help of her family and close friends, she’ll get the answers she wants and needs. – review by Blooming with Books

Book Description:Nikki Bryant’s Next Case Takes Her to the Wrong Side of MurderOne spring morning, Jodi Gibbons got up and went to school as she did every day. Her young life went sideways though when the police found that her mother had been brutally killed during the night.Twenty years later, many in Pine Grove believe Jodi got away with murder. After all, how could she have possibly slept through her mother’s violent death in the very next room?After decades of silence, Jodi accepts investigative journalist Nikki Bryant’s invitation to tell her side of the story. However, before the interview can take place, someone silences Jodi permanently.Now it is up to Nikki Bryant and her friends to uncover the secret that Jodi Gibbons has been protecting—a secret someone believes it is worth killing to keep from being revealed.
Buy the Book:
Audible ~Amazon
BookBub
add to GoodReads

I received a copy of The Wrong Side of Murder by Lauren Carr for an honest review. What follows is my opinion and mine alone. There was no compensation made for this review.
So much goes into writing a good sequel. Sure, you have the setting, which shouldn’t change much, but what about the characters? They have to be the same characters and cannot deviate too much, but you must stay true to character development standards and maybe add something new about them for novelty. You may be tempted to one-up the previous book, but that can be tricky because too much might shake the reader out of the story. In short, the sequel is a difficult path to take.
For Lauren Carr, that sequel in the Nikki Bryant Cozy Mystery series was amazing. Seriously. I enjoyed listening to The Wrong Side of Murder more than the first book, Killer Deadline. If you read my review of Killer Deadline, you already know my feelings about that book, but if you haven’t and want to read it, click here. I liked the first book though it focused more on the characters and setting than the mystery.
For The Wrong Side of Murder, Lauren Carr’s established world and characters balanced perfectly with the mystery that unfolded in the story. And believe me, it was a mystery. I had myself guessing and ended up guessing wrong a few times, but yet . . . well, I’d say more, but the mystery is so entwined with other puzzle pieces that if I say more, I could potentially spoil you.
Now whereas I love a good spoiler, I know the general population of readers does not. So, I can’t say much about the mystery itself. Suffice it to say, what begins as one mystery becomes many, and you can’t help but wonder how they are connected. I have to applaud Carr on this. I honestly didn’t see how it ended. I had theories and was holding on to them, but they did not unfold the way I had them.
Instead, I’ll focus on the characters. In the first book, we ended with Nikki and Ryan starting their relationship. In this book, they are going strong. The main characters’ development isn’t on an individual case but on their expectations.  No, there isn’t a third wheel in motion. No, no one is pressuring our established couple. It’s more healthy than that. Just two people working together and eventually making a decision on what their next step would be.
Elmo the dog, has less presence in the story, though he is still there. Just like Ryan and Nikki, he’s finding his own space and enjoyment as a member of Pine Grove’s citizenship. Nikki does seem to be a bit lost when he isn’t around, but she stands on her own, and soon enough, her trusty pup-sidekick does return to her side. I did notice a bit of character development for Nikki as her own character. In the first book, she seemed to jump to conclusions easily, given that the mystery she was solving was close to her heart. In this book, she’s not jumping to accuse anyone. Instead, she’s forcing herself to take the time she needs.
Why? Because she feels guilty about what happened. I’d tell you more, but again, that would be spoiling the book.
If you’ve read Killer Deadline and liked it, you will love The Wrong Side of Murder. This is a solid sequel and is a step above the first. I will listen to the third book whenever it gets released to audio.
You’ll Also Enjoy This Earlier Nikki Bryant Cozy Mystery, As Well: 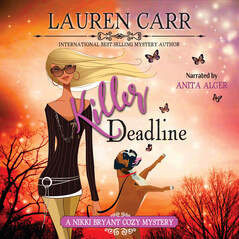 Here we go! Carr is a master storyteller who always offers a plot full of twists and turns, a bit of humor to offset the dark, and a unique cast of characters. In Killer Deadline that cast includes – handsome Ryan, her first love (who is now her step-brother); a mysterious social media friend called Nerdy Guy; Elmo, a super smart dog, a boxer, she rescued who has become a social media star and has a penchant for cleaning; a TV station full of suspicious employees; and more.

This book is a wonderful read to pick up at the end of a long day. It truly is a “cozy murder mystery.”  I promise, it’ll draw you in right from page one and keep you turning the pages until you reach the very last page. I can’t wait for the second book in this series. – review by Marilyn R. Wilson, Olio by Marilyn

Folks in Pine Grove, Pennsylvania, claim that where Nikki Bryant goes, trouble is not far behind. Her refusal to back down from a challenge has made Nikki Bryant a top investigative journalist.

When an online friend nudges her to join him in a pact to reconnect with their first loves, Nikki and her boxer dog Elmo leave the bright lights of Las Vegas for the charming town of Pine Grove. There, she must face the biggest challenges in her career and life—the first love she had left behind and her father’s unsolved murder.

But before she has time to unpack her car, Nikki stumbles upon the dead body of local news anchor, Ashleigh Addison, her childhood rival. Could Ashleigh’s death be connected to an explosive news story that she had teased about airing live? Did that explosive story have anything to do with the murder of Nikki’s father?

With the clues in her father’s cold case hot again, Nikki intends to chase down the story of her life until she catches his killer—no matter what it takes. 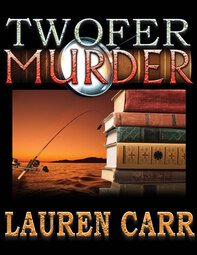 The book is intense, compelling, as readers follow the story lines for two different books. Yet the humor, family interactions, and loving relationships in Carr’s books keeps reading both entertaining and fun… Carr gets better and better in her humorous scenes, as well as snappy dialogue that comes only from within close-knit friends and family… If you aren’t reading this author, you are missing much more than an average mystery writer. – review by Glenda Bixler, Book Readers Heaven

The guys go away for a fishing weekend only to get caught up in the murder of a journalist investigating fraud at a timber company.

Meanwhile, the ladies are spending the weekend in the presidential suite at a posh resort where Jessica Faraday is to accept a lifetime achievement award for her late grandmother at a murder mystery writers conference. But before they have time to get their facials, they get wrapped up in their own real mystery when an up and coming author ends up dead!

Lauren Carr’s Twofer Murder is a 2-for-1—making it a must-read for any mystery fan! 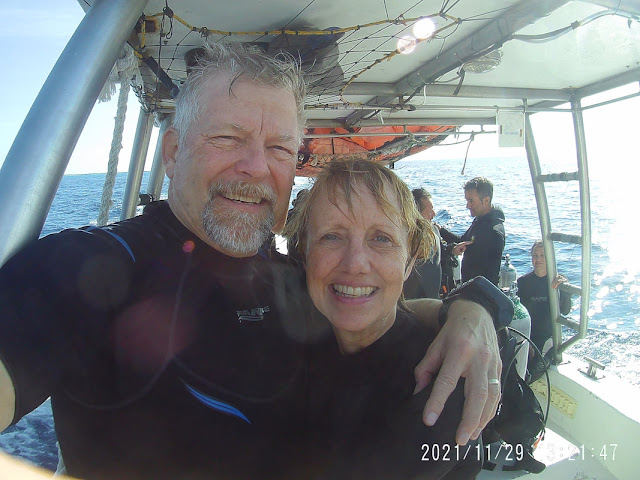 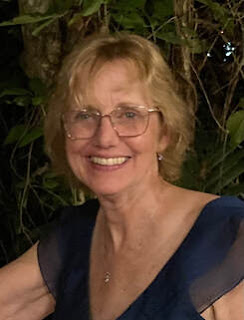 Meet the Audiobook Production Team:Narrator:A relative newcomer to audiobook narration, Anita Alger is a producer and composer of dozens of musical themes for audiobooks. Working with veteran narrator (and husband) Mike Alger, they’ve teamed up to produce over 30 full length audiobooks. While her musical skills are usually at the forefront, she has also narrated three audiobooks herself, including the new Nikki Bryant Cozy Mystery Series written by Lauren Carr.When not expressing herself in the arts, Anita is also a Senior Medical Laboratory Scientist working in microbiology, and therefor knows two dozen ways to kill you while making it look like natural causes. 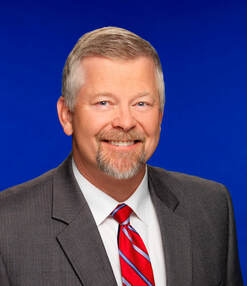 Producer:A broadcast veteran of over 35 years, Mike Alger is best known as the award-winning Chief Meteorologist for KTVN-TV in Reno, NV. Narrator and producer of over 30 audiobook novels, he is also a successful author, having penned the Mystery-Thriller novel Snow Storm, and is the narrator of the audiobook of the same name. He collaborates with his wife of 40 years, Anita Alger, who writes and produces the musical themes for his productions. 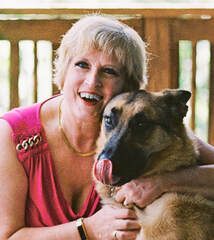 Lauren is a popular speaker who has made appearances at schools, youth groups, and on author panels at conventions.

She lives with her husband, and two spoiled rotten German shepherds on a mountain in Harpers Ferry, WV.

THE WRONG SIDE OF MURDER Audiobook Tour Giveaway
https://widget.gleamjs.io/e.js

5 thoughts on “Blog Tour (Review): The Wrong Side of Murder by Lauren Carr”