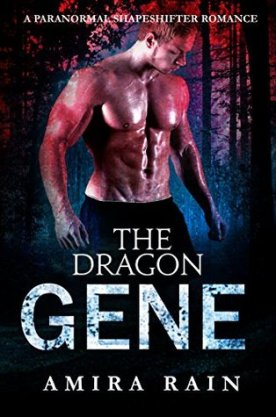 In a world where some humans are blessed with a special gene that allows them to shapeshift into different forms…
Kylie Donovan has just discovered she is a carrier of “THE DRAGON GENE”.

As a result she is being forced by the government to mate with a male carrier of the dragon gene called Matthew in order to produce a special “super” baby that will have two sets of the gene.

However, some genes should never be combined and the results of this match up could be about to threaten the existence of the planet and dragon-kind as they know it…

This is a unique spin on the average shifter romance novel. Download right now to enjoy this super-original book by bestselling author Amira Rain!

First off, do not listen to the audiobook! The narrator is a male narrator. Now, this usually doesn’t bother me. Not with a female main character and an erotica, but the narrator sounded like Jeff Bridges. I couldn’t help but see Lebowski. I know this was a personal turn off, but it was there and you are warned.

As for the writing, the story wasn’t that bad. The main character was relatable for most of the book, but faltered near the end of the story. She did the typical MC makes a poor decision, but even her decision seemed out of place and just very dangerous. It wasn’t a good decision and I personally hated her for doing it. I didn’t see how she was forgiven by her love interest let alone the community of Dragon Shifters she had called home.

Yes, it was that bad in my opinion.

That said, the rest of the book was decent. It was a no-nonsense shifter romance with an interesting background that did have me wanting to know more about. I just recommend no one listen to the audiobook and maybe just try not to throw their kindle into a wall when they get to the point that bothered me.