Praise for KELCIE MURPHY AND THE ACADEMY FOR THE UNBREAKABLE ARTS

“Be prepared, it will be hard to take a break from Erika Lewis’s The Academy for the Unbreakable Arts. The action leaps off the page, rich in ancient Celtic mythology and taut with emotion, with characters who are flawed, human, and awesomely gifted. Middle-grade readers with a thirst for high adventure with all the feels, in the tradition of J. K. Rowling, Tamora Pierce, and Lloyd Alexander, have reason to rejoice.” ―Peter Lerangis, New York Times bestselling author of The Seven Wonders series
“You’ll be on the edge of your seat while reading, and while waiting for more to come in this rich and engaging world. Perfect for fans of Rick Riordan and the Harry Potter series.” ―Janet Fox, award-winning author of The Charmed Children of Rookskill Castle
“Fast-paced and oh-so-fun, this exciting story celebrates the importance of friendship and the power of kids’ choices. I couldn’t put it down!” ―Alyssa Colman, author of The Gilded Girl
“With vivid world-building and a marvelous blend of mythology and magic, Kelcie Murphy and the Academy for the Unbreakable Arts is a rip-roaring ride pulsing with the heart of its fierce and tenacious heroine! The opening installment of this epic new fantasy series will leave readers clamoring for more.” ―Alysa Wishingrad, author of The Verdigris Pawn
“Move over Hogwarts, there’s a spellbinding new school in town. Enroll yourself for myth, mystery and magic. Not to be missed!”―Cavan Scott, New York Times bestselling author of Star Wars: The Rising Storm 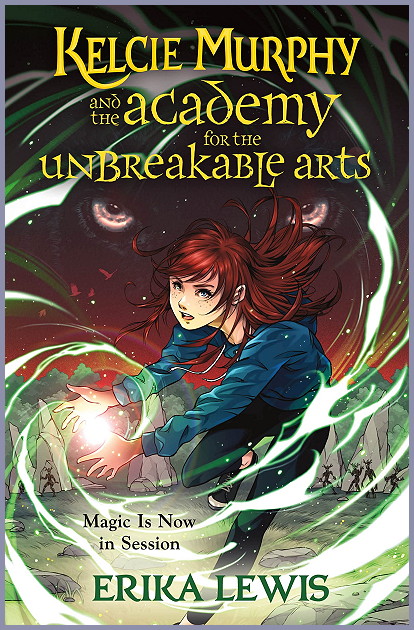 Brimming with Celtic mythology, action, and danger, Erika Lewis’s Kelcie Murphy and The Academy for the Unbreakable Arts introduces readers to a new kind of magical school and a warrior who must choose with which side of an epic battle her destiny will lie.

The Otherworld is at war. The Academy for the Unbreakable Arts trains warriors. And Kelcie Murphy—a foster child raised in the human world—is dying to attend.

A place at AUA means meeting Scáthach, the legendary trainer of Celtic heroes. It means learning to fight with a sword. It means harnessing her hidden powers and—most importantly—finding out who her parents are, and why they abandoned her in Boston Harbor eight years ago.

When Kelcie tests into the school, she learns that she’s a Saiga, one of the most ancient beings in the Otherworld. Secretive, shunned, and possessed of imposing elemental powers, the Saiga are also kin to the Otherworld’s most infamous traitor.

But Kelcie is a survivor, and she’ll do whatever it takes to find her parents and her place in their world. Even if that means making a few enemies.

You can purchase Kelcie Murphy and the Academy for the Unbreakable Arts at the following Retailers:

I received a copy from the publisher for an honest review. What follows is my opinion and mine alone. There was no compensation for this review.

It has been a while since I’ve had this much fun reading a book. Long ago, back when dinosaurs roamed the lands, I was in seventh grade reading the third Harry Potter book. I wasn’t hooked on reading (R.L. Stine did that years before), but I did get hooked on the magical world enough to try books one and two. That feeling in seventh grade is what I felt reading Kelcie Murphy and the Academy for the Unbreakable Arts. Okay, there was another book series that gave me this much smiles that is also written for kids, Alcatraz versus the Evil Librarians by Brandon Sanderson. In truth, if you want humor, action, and magic, Kelcie Murphy is right there with the greats.

We start our adventure with an orphan who has amnesia. All she remembers is her name, nearly drowning in the Boston harbor, and moving from group home to group home. Our heroine, Kelcie Murphy is on a field trip in a museum. Honestly, this scene gave me heavy Percy Jackson vibes in all the best ways. And, it only continues to roll into greatness.

Inspired by Celtic folklore with a great middle grade coming of age twist, this book was something I couldn’t and didn’t want to put down. Each of Kelcie’s inner circle were interesting characters with great backgrounds, the teachers were on the ball with everything allowing the kids to grow into their own, but not being completely unaware, and the fight scenes were awesome. This is a book I want Bug to read so that I have someone else to gush with. I was able to figure out the plot twists, but they are very well hidden if you aren’t looking. Really, it’s just a fun read.

All in all, if you are one of the people who have walked away from Harry Potter and need magic back in your life, pick this book up. I found some life advice for myself in here without realizing it and that makes this story special. I will be picking up a second book and may need the first in hardcopy asap. 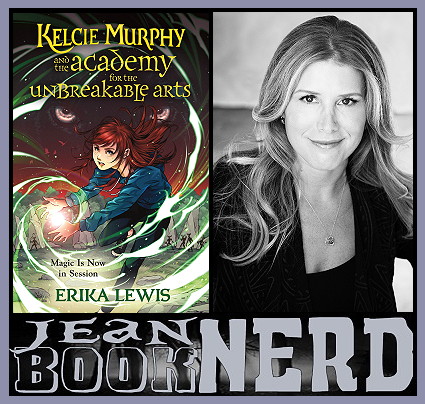 Erika Lewis grew up in Alexandria, Virginia, spent summers with her grandparents in Worcester, Massachusetts, and currently lives in Los Angeles, California. With a passion for storytelling set in magical places, she spends as much time as she can traveling. When she’s not writing, she can generally be found scribbling notes in a blank book while wandering through abandoned buildings, all kinds of museums, and graveyards.
A graduate of Vanderbilt University, her list of credits straddles the comics and novel space, including Game of Shadows from Macmillan’s Tor Books, Firebrand and Acursian from Legendary Comics, #Guardian from Awesome Media & Entertainment, and The 49th Key from Heavy Metal Publishing. The Color of Dragons is her debut YA, coming from HarperTeen October 19th, 2021, and Kelcie Murphy and The Academy for the Unbreakable Arts is her middle grade debut coming from Starscape/Macmillan March 1st, 2022.